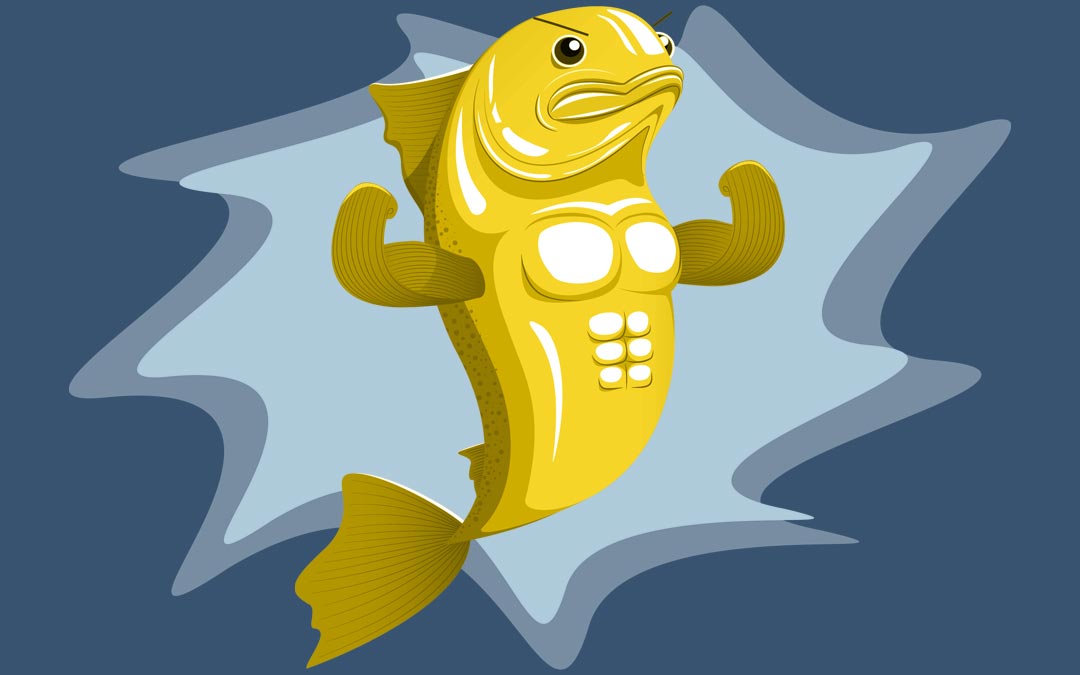 We all know how important protein is for recovery after a workout. It’s second nature for athletes to chug a protein shake and eat platefuls of meat to rebuild muscle before training again. But which protein source is most beneficial?

As a personal trainer and health coach, I’m not a fan of throwing around the term superfood; this buzzword is used too often by companies to promote their scammy products. I’m willing to make an exception to that rule. There’s one high-protein superfood that you absolutely should include in your post-workout meals: wild-caught salmon!

This isn’t some crazy infomercial-style exaggeration either. When compared to its other protein-rich counterparts, wild salmon has so many more health benefits than just the protein content itself. Best of all, it’s keto and paleo-friendly!

Wild Salmon’s Got It All

It’s no secret that salmon are best known for their healthful omega-3s, also known as polyunsaturated fatty acids (PUFAs). When compared to farm-raised salmon, wild salmon has a better omega-3 to omega-6 ratio and fewer toxic contaminants. By choosing wild salmon, you’re also choosing to not contribute to the sea lice infestations currently threatening wild salmon populations, which is a whole other issue.

The healthful nutrients and benefits of wild salmon are impressive. A single 3oz-serving of wild-caught salmon packs a massive punch of B vitamins for enhancing your energy production. It provides hefty doses of phosphorus, calcium and vitamin D for building stronger bones. There’s also a full spectrum of electrolytes to help replenish the body after a sweaty workout. Wild salmon is also high in selenium, an essential mineral that doubles up as an antioxidant, perfect for gym rats and athletes to help minimize the oxidative damage to tissues caused by high-volume training.

As a salmon lover, it’s no coincidence that I moved to Campbell River, BC (the salmon capital of the world), where wild-caught salmon is easy to get. Regardless of where you live and shop for fish, the omega-3s from wild salmon provide a myriad of exercise recovery benefits.

Ever wonder why people lose muscle over the years as they age? Age-related muscle loss (sarcopenia) isn’t an inevitable fate, as one might assume. While there are many factors that play a role in sarcopenia, a chronic state of inflammation is one of them. After years of continued inflammation, these individuals begin to lose the ability to synthesize protein properly, thus resulting in a diminished ability to build muscle.

You can prevent and treat this hideous geriatric syndrome by simply getting more omega-3s in your diet. The anti-inflammatory properties of omega-3s help to reduce the chronic low-grade inflammation which is believed to contribute to the development of age-related sarcopenia.

Cool Your Inner Flames. Get Huge.

When it comes to growing muscles, understand that not all inflammation is bad. Acute inflammation caused by micro-tears during training is actually good and healthy, as it helps to trigger the metabolic repair processes that rebuild muscles bigger and stronger. As a personal trainer, it’s what I want to see happen to my clients so that they can get the results they want.

Inflammation only becomes a problem when certain dietary and lifestyle factors create a state of chronic inflammation systemically (meaning throughout the entire body) that lasts for months or years. Unlike acute inflammation, chronic systemic inflammation means your body is in a constant state of stress and degeneration, unable to fully heal.

Luckily, omega-3s have been proven to have a significant anti-inflammatory effect in both animal and human trials time and time again. This is very encouraging news, as we are able to keep inflammation at a healthy level that favours building muscle and optimizing performance, as opposed to losing it.

Another one of the anti-inflammatory benefits of omega-3s is to help reduce DOMS (Delayed Onset Muscle Soreness). Ideally, this benefit should enable bodybuilders, athletes, and basically anyone who works out to recover and train more frequently instead of waddling around like a penguin after squatting two days ago.

Chronic mental and physical stress are your muscles’ worst enemy. Constant over-training and emotional drama can cause chronically elevated cortisol, a catabolic (muscle-destroying) stress hormone that breaks muscles down and makes you weak. Elevated cortisol also blunts the anabolic (muscle-building) effect of the hormone testosterone, which affects both men’s and women’s abilities to build muscle. Salmon-lovers will delight in knowing that omega-3s help to lower cortisol, allowing you more opportunity to exist in a state of blissful anabolism.

What many people don’t know is that Omega-3 fats increase IGF-1, better known as Insulin-Like-Growth-Factor 1. IGF-1 is another anabolic hormone that assists in the growth of muscle fibres. It increases the levels of another hormone called IGFBP-3, which extends the time that IGF-1 lasts in the body.

In addition, omega-3s have an anabolic effect on muscle by activating the metabolic signalling pathway known as mTOR (mammalian target of rapamycin). It’s funny, In the bodybuilding world, there are numerous, expensive supplements that claim to boost mTOR, none of which contain omega-3s or protein, yet cost as much as of 3 or 4 planks of salmon.

When consumed in moderation, the omega-3s found in salmon can actually help you burn body fat. There are two primary mechanisms responsible for this. The first one is its effect on a hormone called leptin. Leptin is responsible for cueing you so stop eating. In other words, it causes the
sensation of fullness and satisfaction you feel after eating a meal. When it decreases, another hormone called ghrelin raises, causing you to feel hungry. Both DHA and EPA have a profound effect on leptin, as it stimulates its secretion to a very significant degree.

The other mechanism is its effect on insulin. Insulin is an anabolic hormone in our bodies that takes glucose from our blood to various cells within our bodies to be used as energy at a later time, whether it’s stored glycogen in the muscle or stored body fat in our midsections.

Overweight individuals tend to lose the ability to utilize carbohydrates properly due to insulin not being produced as efficiently or the muscle cells simply not responding to the signal of insulin anymore, leading to insulin resistance and even worse: diabetes. Omega-3s can help increase insulin sensitivity which in turn will help you optimize the utilization of carbohydrates for energy when you need it most – in the gym!

There’s a very important antioxidant that works synergistically with omega-3 fatty acids that give it an even greater anti-inflammatory effect. This antioxidant is called astaxanthin. Interestingly, astaxanthin is what gives salmon its red colour. A study in mice showed that supplementing with this antioxidant alone was able to reduce inflammation from exercise, as well as skeletal and cardiac muscle damage.

Keep Your Head in the Game

The aspect of mental health and performance is often overlooked for anyone training in the gym. In many sports and athletic pursuits, mental performance is just as, if not more important than the physical aspect. If one wishes to go down the rabbit hole, there is no shortage of studies touting the brain and mental health benefits of omega-3s.

In one double-blind study, volunteers who took omega-3 supplements versus a placebo improved significantly on mood parameters such as anxiety, fatigue, and depression. Each of these parameters plays a notable role in the performance of athletes, as the presence of any of these conditions can cause significant hindrances in performance. Also, measures of both attention and reaction time were also improved, which is obviously beneficial to athletic performance.

Take Advantage of Wild Salmon Where and When You Can

As a personal trainer and health coach in Campbell River, BC, the salmon capital of the world, I always recommend eating wild-caught salmon to my clients. It’s easy to source whether you’re fishing off Discovery Pier or buying it from Crabby Bobs or St. Jean’s. Even if you live far from the ocean and buy your wild salmon in the supermarket, the health and fitness benefits are worth every cent.

Work with me online or in Cambell River, BC